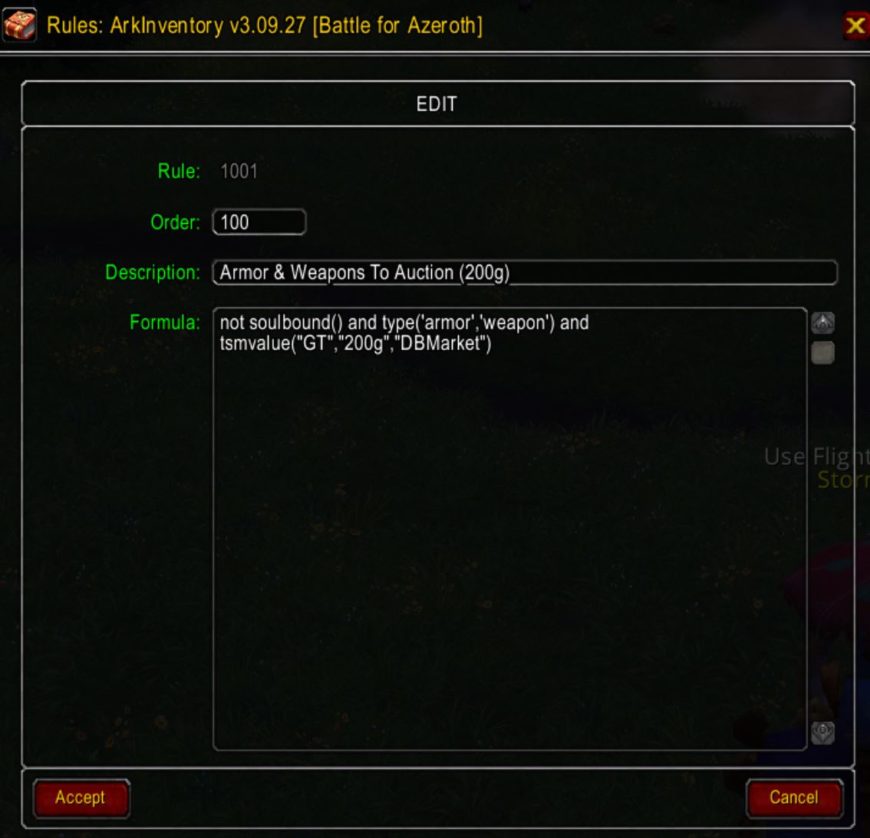 At time of writing I’m new to TSM4 but in the pursuit of learning, I’ve been coming up with ideas that would be nice to have, generally finding out it’s not possible (but used to be) and then figuring out a way to accomplish what I want.

That preface is required so you know that you’re not dealing with a savant of the TSM community … or an expert in any of the related fields.

I thought of a workaround; use Loot Appraiser, in it’s config, name a TSM group, then Loot Appraiser’s Sell buton will factor that group in.

The problem with this is that you need to bring up the Loot Appraiser window – while this isn’t a big deal, I’m alway seeking the most optimal / automateed / quickest way to deal with the issue, beacuse time is money friend .. so lets save time by automating as many things as possible.

First of all, even if you don’t want to sell soulbound items, I recommend widening the scope of what rules you can create, with an awareness of BfA by using this addon (MoreRules).

ArkInventory is my favourite Inventory Add-On, and has been since I discovered it. It isn’t as popular as Bagnon – I presume because it doesn’t become the wonderful work of art that it is, without some configuration at first. So if you don’t and won’t use ArkInventory, consider the LootApprsaier solution above…. or head over to TSM’s forums and let the devs know you want this functionality back (apparently in TSM previously you could sell soulbound gear; as I say – I’m new to using TSM so I don’t personally know).

The solution is quite simple if you’re already using ArkInventory; just assign a group to a rule which tells ArkInventory to autosell anything inside that group. That’s the solution to selling soulbound items via autosell rather than vendoring your items 1 by 1.

The rules for the group are up to you….

That doesn’t involve TSM very much, so here’s the tip of an iceberg for you – ArkInventory “knows about” TSM, so you can create rules based on an item’s market value; this is great if you want to organise your bags in a way that”s reactive to the market value of items: exactly how or why you do this, is up to you and your goals. I don’t have any strong recommendations at this point as I’m still learning about Rules and TSM … and how to export WoW Models and render them in Blender or Cinema4D, and how to create the ultimate minimal WoW UI and how to overclock my GPU but make it MORE stable despite running faster and also…. etc.. so my plate is too full to recommend anything specific for you right now.

So far, I have it put any Weapon or Armor with a market value of 150 gold or more in a separate group. This will prevent me from accidentally endorsing anything I would like to auction because my mouse will simply be too far away to click an item accidentally.

The added benefit of this is that when you are managing your Inventory, you can clearly see a collection of weapons and armor which you will be selling at a later date…your inventory awareness will go up by default because you get an at-a-glance view of how many items you’re carrying that are Auction-fodder. That doesn’t seem like a direct benefit, because it isn’t… it’s a meta-benefit; like taking the same route to a location every day, you will go from nervously checking Google Maps to make sure you’re en route… to taking a casual stroll and playing games on your mobile etc.. Why is that beneficial? It just is.